Not sure if it's official, but SNY says they cut Vernon Gholston, Kris Jenkins, Damien Woody and Jason Taylor.

Gholston was a total bust. The others are old, injured, or both and were making a lot of money.

Apparently, all 4 could be asked back on reduced contracts.
MarkJohnson>You

I'm a LITTLE surprised on Woody, but I think the writing was on the wall. Not at all on the others, and thank god on Gholston and Taylor, two of my least favorite Jets ever (obviously my distaste for Taylor mostly predates his Jet days when he was actually good, but his crappy play for my team last year solidifies his standing in my all-time hatred book).

I hope they bring Big Daddy back on a reduced deal just to see what he was left. With the emergence of former role players Devito and Pouha up front, its not longer the huge hole it seemed when Jenkins first went down during the 2009 season, but he'd just make that line THAT much stronger (especially when you could go overload against heavy run teams/situations and put Pouha out wide on an end).

They do need to get younger on the defensive "rush" side of the ball anyway, so clearing those 3 spots for FA's and draft picks (still hope they go DL/DE in the first round depending on whos there) makes a lot of sense.

I wonder if they dont bring Woody back, do they try to go with a rookie there or did they see enough in either Hunter (meh, not terrible but nothing special) or Vlad in practice to again roll the dice a bit on their line like they did with Slausen last year (which actually worked out OK).
sluger11787

I'm really uncomfortable with the rumblings of Ducasse getting a shot to be the starting RT. I'm hoping there's a way they can re-sign Hunter. He was solid when pressed into action when Woody got hurt.
chinabox

I'm actually amazed that this guy didn't turn out to be a solid NFL player. 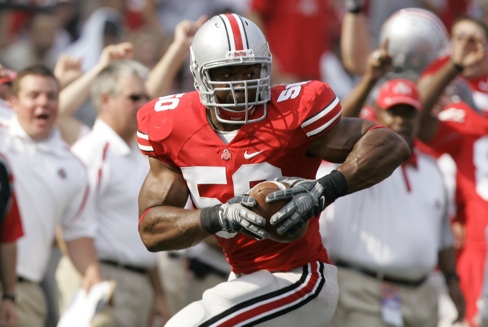 chinabox wrote:I'm actually amazed that this guy didn't turn out to be a solid NFL player.

Problem was, outside of a few game stretch his junior year, he wasn't much of a solid college player either.

Workout warriors...its not like this theory hasn't been tested in the past.
MarkJohnson>You

sluger11787 wrote:I'm really uncomfortable with the rumblings of Ducasse getting a shot to be the starting RT. I'm hoping there's a way they can re-sign Hunter. He was solid when pressed into action when Woody got hurt.

Probably do this and hold a competition.

I know the line is the heart of this team, but I can't see them essentially giving up on Vlad, a guy they clearly coveted last year, after 1 year by either using a high draft pick on a tackle, or signing an expensive veteran that Vlad sits behind for a while. RT is his natural spot (as "natural" as can be for a guy still new to the game).

I think its important to also note here the Jets blocked Bill Callahan from interviewing for an OC job, perhaps for this reason. Guy is a wizard when it comes to developing lines.

In fact, why don't we just do right by everyone and cut Schotty and promote Callahan? Sorry...hadn't lobbied for Schotty to be fired for a while.
MarkJohnson>You

Not surprises, but the DN confirms that LT will be back and Conner will be the starting FB (aka, TRich is not going to be resigned).

Good moves, so long as LT is being brought back as a pass-catcher/3rd down back and really is in a competition with McKnight for packages/snaps, and we finally take the training wheels off Greene.
Chico

I had my doubts about some of their moves last year, but a lot of them worked out okay by the end of the season (after a bumpy start, they were fine at left guard).

The NFL is ruthless when it comes to aging guys and the cap, but I doubt I'll ever get used to it when they cut guys who are still relatively productive.

Woody is a completely class act. I believe he lost out on something like $4 mil and he tweeted to thank the Jets for giving him the chance they did when he heard he was cut loose.
Post a reply
Switch to full style